With attention this week turning to Carl Frampton’s challenge to Kiko Martinez for the IBF super-bantamweight title on Saturday, British rival Scott Quigg has received confirmation that he will defend his WBA super-bantamweight crown against Belgium’s Stephane Jamoye in Manchester on 13th September. Quigg was originally due to face Paulus Ambunda who pulled out after suffering a hamstring injury in training. END_OF_DOCUMENT_TOKEN_TO_BE_REPLACED

It’s been a great week for British and Commonwealth featherweight champion Josh Warrington. The 23-year-old has been handed home advantage to contest the vacant European Featherweight title (previously the property of Lee Selby) against Davide Dieli at the First Direct Arena in Leeds on 4th October. The unbeaten ticket seller has also penned a five-fight deal with Matchroom.

35-year-old Italian Dieli has a 15-3 (5) record. His most notable loss was against compatriot Alberto Servidei who outpointed him for the Italian featherweight title in 2010. Servidei was subsequently halted in the opening round by Australia’s Billy Dibb when challenging for Dibb’s then IBF featherweight crown in 2011 and hasn’t fought since. END_OF_DOCUMENT_TOKEN_TO_BE_REPLACED

Matchroom obviously think Anthony Joshua is a sure thing. After announcing on Wednesday that the Olympic champion will next face Konstantin Airich at the Phones 4 U Arena in Manchester on 13th September, on Friday they issued another press release to reveal that Joshua will meet Denis Bakhtov on 11th October in London in the prospect’s first title fight.

Do I anticipate that Joshua will come unstuck against Airich? No. But is announcing Joshua’s future fights before he’s taken care of his next opponent a little premature, or does it highlight how important the heavyweight is to Matchroom in terms of putting bums on seats at the O2? END_OF_DOCUMENT_TOKEN_TO_BE_REPLACED 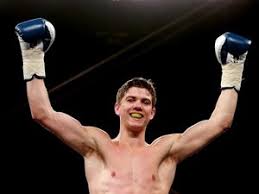 Matchroom appears to be putting plans in place for a future clash between Hull lightweights Tommy Coyle and Olympian Luke Campbell. The promoter has recently announced an intriguing double header at the Ice Arena in Hull on October 25. The exciting but vulnerable Coyle takes on the equally exciting but fading Aussie Michael Katsidis, while Campbell faces Daniel Brizuela – the Argentinean who swapped eight knockdowns with Coyle in February before he was finally stopped in the twelfth round by the Hull man. END_OF_DOCUMENT_TOKEN_TO_BE_REPLACED

I browsed BoxRec last night, as I often do, just before going to bed. I happened to notice that veteran scribe Graham Houston was browsing the forum but thought nothing of it. Until I revisited the site this morning. The sad, shocking news of Glyn Leach’s passing at just 52 really upset me, and I barely knew him. END_OF_DOCUMENT_TOKEN_TO_BE_REPLACED

How does a defending American world champion get jobbed in his own country? That’s the conundrum I’m reflecting on this morning as Sheffield’s Kell Brook was awarded a majority decision over Shawn Porter to claim the IBF welterweight crown in Carson, California on Saturday. END_OF_DOCUMENT_TOKEN_TO_BE_REPLACED